Oct. 9 - Gunmen have wounded a 14-year-old rights activist who has campaigned for girls' education in the Swat Valley in north-west Pakistan.

Watch the video and answer the questions. Click on the heading below to view the questions alongside the video. If you click on "flip", you can see the answer to each question.

Alternatively, you can click on the image below to watch the video. Then answer the following questions. 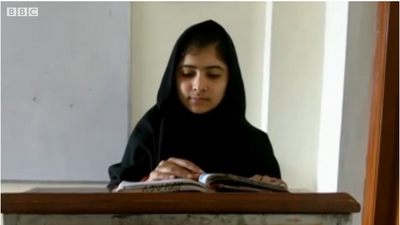 TRANSCRIPT
REPORTER: Rushed away for treatment, the teenage girl who dared to defy the Taliban. Malala Yousafzai was shot in the head. Doctors say the next few days will be critical. This was Malala in her beloved classroom. When the Taliban tried to take it from her, she spread the news around the world. It was 2009 and the militants controlling the Swat Valley decreed that girls' schools must close. Malala, then just 11, started a blog for the BBC Urdu Service written under a pen name. This was one of her entries.
MALALA: I was very scared getting ready for school today because the Taliban announced that the girls should stop going. Our head teacher told us at assembly we shouldn't wear a school uniform and just come in normal clothes. Out of 27 girls only 11 attended class today.
REPORTER: After the militants were driven out, Malala was an outspoken campaigner for education for girls winning recognition at home and abroad. A family friend told us she will fight on if she makes a good recovery.
FAMILY FRIEND: She will continue to educate herself, she will continue to inspire others also... I don't think they are going to chicken out, I don't think they are going to surrender.
REPORTER: But the Taliban have threatened to target her again. They said she is western-minded and will not be spared. Tonight Malala remains in intensive care with her family at her bedside. Brutal Taliban attacks are nothing new here but the shooting of a child has caused shock and revulsion. The militants have said anyone else who speaks out against them, as Malala did, will be silenced. Orla Guerin, BBC News, Islamabad