Find out which traditional recipes weren't served at the first Thanksgiving celebration.


Click on the image below to watch the video. 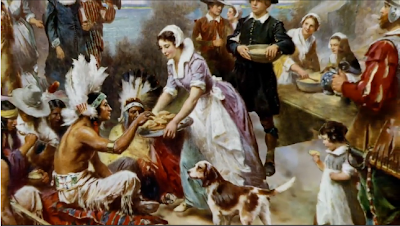 TRANSCRIPT
We are all familiar with the story of the first Thanksgiving, when the Pilgrims invited local native Americans to share a meal with them. But we bet you didn't know Thanksgiving didn't become an annual tradition until more than 200 years later.
That first Thanksgiving in 1621 wasn't just one big meal. It was a three-day festival of eating, hunting and other entertainments in honor of the Pilgrims' first successful harvest. The Indians killed five deer as gifts for the colonists. So venison was definitely on the first Thanksgiving menu but we bet you didn't know that turkey was not. They also didn't have pumpkin pie or potatoes, which hadn't been introduced to New England yet. And while they may have eaten cranberries, they would have been served plain not in a sauce or relish.
The Pilgrims didn't plan on starting a Thanksgiving tradition. In fact they didn't repeat the November celebration in subsequent years. In 1789 President George Washington announced the first ever national Thanksgiving holiday, which took place on Thursday November 26th but it didn't become an annual tradition nationwide until the 19th century. That's when an American writer named Sara Josepha Hale, most famous for writing the nursery rhyme 'Mary Had a Little Lamb', was inspired by a diary of Pilgrim life to recreate that first Thanksgiving feast. Beginning in 1827 Hale waged a 30-year campaign to make Thanksgiving a national holiday. She also published recipes for pumpkin pie, turkey and stuffing, that probably didn't appear on the Pilgrims' plates but would become staples of modern Thanksgiving meals.
In 1863 in the midst of the Civil War President Abraham Lincoln announced that the nation would celebrate Thanksgiving every year on the final Thursday in November. But did you know in 1939 President Franklin D. Roosevelt decided to move the holiday up a week to give Depression Era retailers more time to make money during the pre-Christmas shopping season. The move was widely criticized and in 1941 F.D.R. signed a bill fixing Thanksgiving on the fourth Thursday in November, where it stays today.
One of the quirkiest Thanksgiving traditions began in 1989 when President George H. W. Bush granted the first official pardon to a turkey. Every November since then the current oval office occupant has given a reprieve to one or two turkeys sending them into retirement on a farm rather than to a dinner table. Though it only began in the late 20th century, the story has become one of the more unusual chapters in the long history of Thanksgiving traditions.

Now test your knowledge of Thanksgiving with the following quiz.


The Thanksgiving Quiz » Quiz Question Maker
Posted by Areti Gavalaki at 3:27 AM 0 comments