Sept. 20 - A Bedfordshire cat has been stealing clothes and other items from neighbours.
Denis, a two-year-old black and white cat, has stolen underwear, shoes, shirts, paintbrushes and even a doll.
He brings them all back to his embarrassed owner Lesley Newman at her home in Luton. 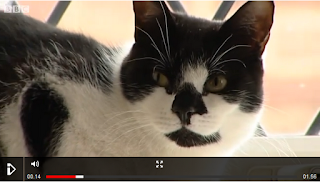 Click on the picture above to watch the video. Then answer the following comprehension questions.

TRANSCRIPT
REPORTER: This is Denis, who is a real menace. I couldn't work out if he was shy or maybe the feline felon was just trying to stay one step ahead of the law because Denis has been stealing stuff from his neighbours and this is the CCTV footage which proves it.
MRS NEWMAN: Tea towel, bath sponge, car sponge, towel, another tea towel, a Fred Perry T-shirt...
REPORTER: You name it, Denis, a two-year-old rescue cat will nick it. Socks, pants, footballs, anything he can get his paws on. The CCTV footage of the cat kleptomaniac returning home with the stolen goods is fast becoming an internet sensation with 385.000 hits on YouTube. Why did he do it?
MRS NEWMAN: Some people say it's because he's never been taught how to hunt. Well, I think it's because he likes me.
REPORTER: He wants to bring you things.
MRS NEWMAN: That's how I take it.
REPORTER: Denis has his facebook page, would you believe? And there's even a 'Denis stole my pants' T-shirt, which you can buy to help raise money for Bedfordshire Homeless Cat Rescue Centre.
He has become a bit of a celebrity now. How is he coping with his celebrity?
MRS NEWMAN: We try to keep a lot of it from him. Don't want to be too much of these... It could have gone to his head a little bit... I'm not sure. I think he's his own cat, he likes his own thing.
REPORTER: Owner Lesley is now in talks with a local author about a children's story book based on Denis' life. Surely a Hollywood film can't be far away.

VOCABULARY
A cat burglar is a thief who climbs up the outside of a building in order to enter it and steal something
A feline is a cat or other member of the cat family.
A felon is someone who has committed a serious crime such as murder or robbery.
When you are one step ahead of the law, you manage to avoid being caught by the police. e.g. So far the killer has managed to stay one step ahead of the police/law.
When someone nicks something, he steals it (British slang). e.g. I nicked a couple of cars when I was younger.
Posted by Areti Gavalaki at 8:09 PM